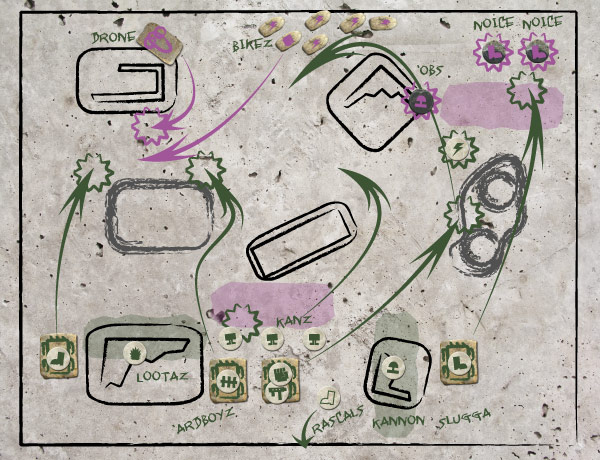 CSM: Bikes move up to the center. BD miss the trukks but hit the rascals who imediately flees off the table and shoots down the deffkopta.
Orks: Go! One Kan blows up running through the minefield. All trukks rush forward top speed. 'Ard boyz charge bikers while west trukk mob fail to reach them and get stranded in the open. 'Ard boyz knock down two bikes but are wiped. Nob trukk and East trukk dive into the woods on the east flank.

CSM: Bikes retreat center north. Noisemarines unloads on nobs but only manage to do one wound.
Orks: Empty trukks block the bikes. Lootas down another biker. The nobs get stuck in terrain. East trukk jump out and crash in the minefield. The boyz charge and kills the first noice marine units.

CSM: Yersinia charge and kills the Lootaz
Orks: The Nobs charge Yersinia. Zagburn crush him with his powerclaw. No CSM left.

- How waz da fight grim Zagburn?
- Hur hur. We smacked da pink eadz and took da loot. Got me a trukkload of bikez, guns and teeth. Bad stuff - their big kopta waznt a kopta at all. Just an ugly slime squig. Nothing to loot dere. 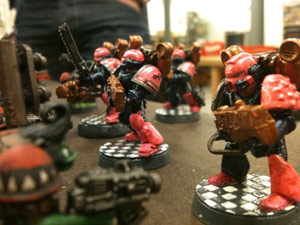 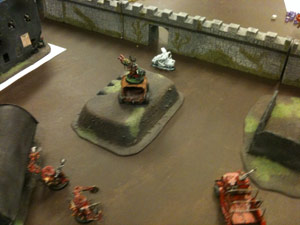 Re: Spikey surprise: Zagburn vs Yersinia 1