Slave raider, not Land raider. From the Battle mission book.
Table 4x4" Deployment zone is 9-24" in from each your table edge. 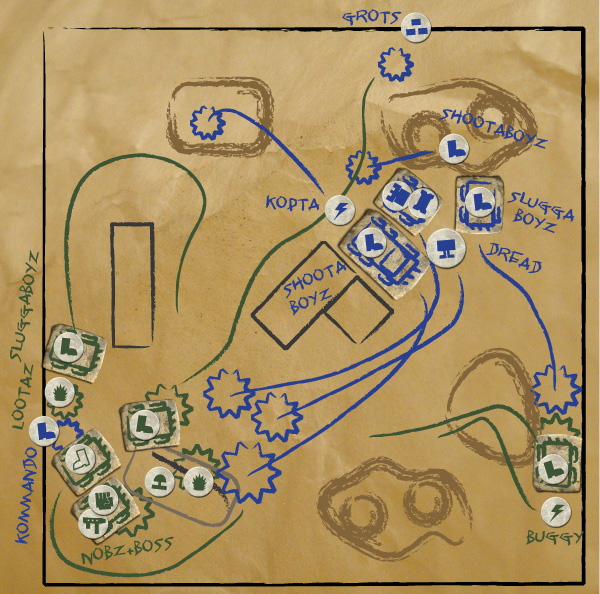 Deployment
Grabnutz starts. The battlewagon parks right behind the center building. Grabnutz two trukks and deffkopta castle up besid it behind the dread. The shootaboyz hide in the back forest, kommandos outflasnk and the grots promise to enter form reserve.
Zagburn place a trukk and the rokket buggy on the east flank. First loota unit and the lobbas take cover in a ruin to the west. Surrounded by the trukks and the other lootas.

My plan:
- I try to stay as far away as possible on the small table and try to break up the enemy. Try to take out the vehicles to slow them down and soften them up with dakka. Orks vs ork action is all about who's get the charge. If I can keep my trukks rolling I got the upper hand. The meganobs will be hard even for my nobs.

Turn 1:
G: BW roars ahead with deffrolla in full spin. Gabnutz trukk and the dread right behind it. Deffkopta sweeps west and hit my first trukk, wich spins out of control and crashes agains the center building. The shootaboyz runs west out of the forest. Their two big shootas hit Zagburns trukk with all shots and immobilize it. The second trukk drives up the east flank, the boyz disembark and wrecks my trukk.
Z: West trukk drives up the flank and the boyz jump out and gun down the deffkopta. The trukkboyz that crashed agains the center building runs forward, charges and wipes the surprised shootaboyz. Lootaz and Lobbas fail to damage anything. The eastern trukkboyz make the other mob pay for the blown up trukk. The rokket buggy dash forward and tries to hit the BW but the dread stands in the way and the shot miss.
- 3 trukks down and I failed to stop his BW. This could get ugly.

Turn 2
G: Battlewagon tries to roll over the Lootas but manage to roll a double one and get stuck at the edge of the ruin (praise Mork). Grabnutz Trukk slide past it and the Dread guard it's rear. Grots enter behind the back forest.
Z: Rokket buggy get another shot at the BW but miss. Shootaboyz from my back trukk jump out and the Nob charge the immobilized Battleewagon with his claw. Kaboom! Zagburn and his nobs move over to the functional trukk to get a better view. Lootaz manage to blow up Grabnutz trukk. And the Lobbas manage to take two wounds from the meganobz when they crawl out of the wreck. The boyz that downed the deffkopta jump back in their trukk and drives back for the final battle. The grots get spanked by my center boyz. My east boyz runs across the board afraid to miss the party.
- Looking better but I still await the big charge

Turn 3
G: Kommandos enter from the west and cut down the other loota squad and shake the nobs new trukk. Grabnutz and his meganobs unload on the lootaz and charge them killing all but one. But he stand his ground. The Dread wipes out most of the trukkmob with his scorcha and stomp the rest in close combat. The shootaboyz from the Battlewaggon runs up to one of my trukks and manage to shake it.
Z: The west trukkboys jump out. The boyz slaughter the shootaboyz from the battlewagon and the nob rips the Dread apart with his claw! Zagburn decide to step in and charge the kommandos and the meganobs. The kommandos don't stand a chance and the meganobs fail to defend themselves. Only Grabnutz manage to flee.
- By gork. We did it.

Turn 4
G: Grabnutz tries to run home but doesn't get far in his damaged mega armour.
Z: Zagburn and his boyz surrounds and wrestle down up their prisoner.

The two final kombi charges won me the game. Lobbas and lootaz didn't do much but worked as great speed bumps. It was fun to be the one that let the enemy come to me for once.

Comment on the mission: This mission had a really close deployment. If it wheren't for a big building in the middle we would just jump each other throats. But it was fun to try something new. 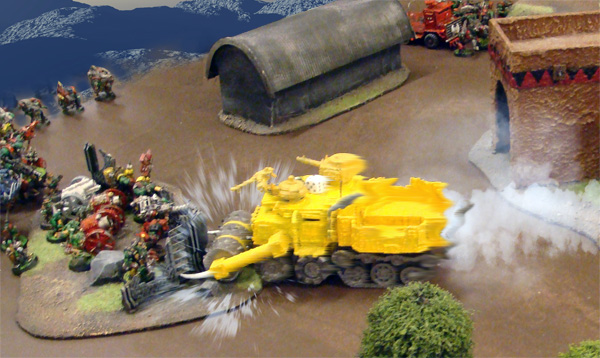 Battle waggon crash in the ruin and get stuck 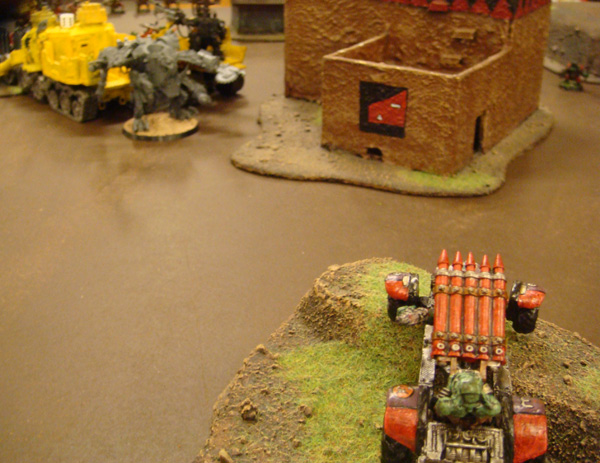 The dread act as rear guard 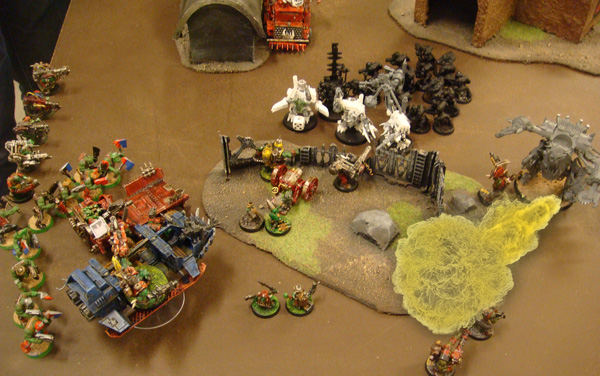 The fearfull charge of the meganobs 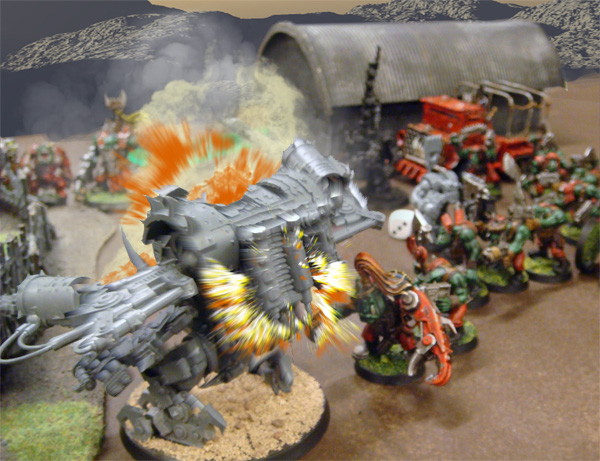 The nob rips the dread apart

The last prisoner
Chaos, panic and disorder... My work here is done
Upp